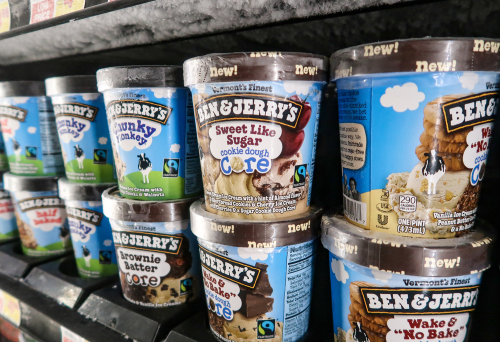 By now, almost everyone is familiar with Ben & Jerry’s story. Not the story of the two Jewish friends Ben Cohen and Jerry Greenfield, who founded the iconic ice cream company.  The story everyone is talking about is about the current owners, Unilever, who are planning to end their contractual arrangement with their Israeli distributors when their contract expires at the end of 2023 unless they cease selling products over the Green Line. I still remember the words of my marketing professor in Baruch College: “There is no place for political or social infusion when marketing a product.” Perhaps that was then, nearly a half century ago, but today we seem to be going in the opposite direction, where political statements are not only appropriate but expected.

Not only can a company today inject its political views and social values into its narrative; it can use its position as a powerful weapon to bring the marketplace closer to its views. It would take a thick volume of paper to list all the companies that have used this weapon to support issues like Black Life Matters, to voice their protest against former President Donald Trump, and to repudiate the behavior of stars often used as spokesmen for a brand. Corporate America most recently injected themselves into the Voting Rights bill controversy and President Biden’s attempt to raise taxes to pay for his infrastructure bill.

There are several problems with this approach. For one, it violates the all-inclusive admonition of Marketing 101 since it no doubt alienates a portion of the constituency. It raises the possibility of a consumer backlash even if it is only by a portion of the buying public. Finally, it shapes the image of a company not based on its product but issues that have little to do with the product itself.

It just so happens that Ben & Jerry’s also crossed the legal line since 35 states have laws on the books or executive orders that outlaw succumbing to BDS (Boycott, Divestment and Sanctions). It also smacks with hypocrisy because there are no BDS-like sanctions for governments and regimes that have a record of human rights violations or who have in fact killed millions of their people.

Ben & Jerry’s action has caused a consumer outcry, including calls for a boycott. Who but Jews have suffered more from Boycotts? What is worse for Ben & Jerry’s is that the BDS movement has been linked to blatant anti-Semitism.

But for me the question remains business-oriented?  Even if the company minimizes the impact of people who eat kosher (not Chalav Yisrael) and totally disregard the Israeli market, the fact is that the company is now on record as having disenfranchised millions of consumers and their families. No marketing or business expert would call this a wise business decision.

Past business actions like the recent one showed that the consumer is not very forgiving. Years ago, when Pepsi Cola acceded to the Arab boycott, it took many years for a new generation of customers to forgive and forget to the point where Pepsi is today a leading beverage producer in Israel. Studies have shown that when customers have a choice, they and perhaps even generations following will chose another brand just to avoid the troubled brand. Thus, even if Unilever somehow manages to rescind its threat, the B & J episode will always be remembered.

Despite an occasional aberration, for the most part companies have sought to be inclusive, and kosher is a good example. Hundreds of supermarkets across the nation carry kosher products to satisfy the Jewish communities in their areas. Frequently those communities may be tiny, certainly as compared to the larger community but still the supermarkets will cater to the kosher constituency especially for Passover.

This all-inclusive policy had in recent years extended to the labor force. Companies have hired people from the community. Already, many stores including large chains like Publix, Gristedes and Morton Williams have announced that they will no longer carry the ice cream. The list in the coming days and weeks is likely to grow. According to some experts, Ben & Jerry’s action shows an extremely strong bias and shows that they would rather throw business under the bus than accept diversity in their political and social thinking.

While it may be true that we are moving into a new era of buckling to the demands of progressives, businesses will have to fight their way through this fog to remain true to their business mission. All of this should not be confused with social responsibility. When a company works for a clean environment or even maintaining a highway, that is for the good not only for consumers but most people.

By infusing itself into Middle East politics and singling out Israel, the company has permanently tainted its image. It opens the door for other one-issue organizations to make stiff demand on the company. It also gives the competition a gift that they could not have gotten through the normal competitive route. That alone makes it a poor business decision.

The company could have made its point without the threat of cutting off the Israeli distributor. It could have, for example, made note of the fact that the selling of its products in Yehuda and Shomron is not a reflection of the company’s political position on the Middle East dispute. As it turns out it will hurt the very people they are purportedly advocating for, the Palestinians since many Palestinians work in the distribution company.

There is no doubt that the recent Ben & Jerry’s episode will be viewed from many angles. It is pure and simple a consumer issue. Those that eat the Ben & Jerry products and are no longer comfortable with the company should simply shun the products in every way they can. Those that never bought the product should share the memory so that if the company one day chooses to produce a Chalav Yisrael product, there should be the memory of the July 2021 events.

What Ben & Jerry’s did is a lesson for businesses in general: “do not bite the hand that feeds!” It is time to get back to old-fashioned marketing: inclusiveness and accommodations. It works!