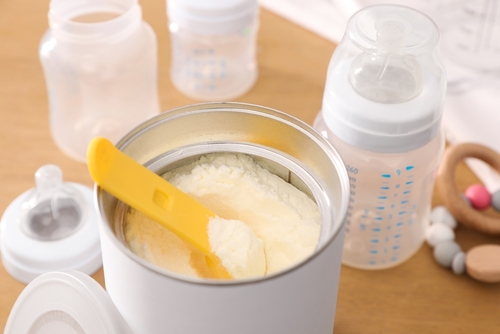 By now we are all aware of the supply chain issues that are plaguing our country. We have seen the visuals of the empty shelves and the backup of cargo ships waiting to be unloaded at US ports. You may have even built up a tolerance for goods in short supply, especially when you are told that paper towels or tissues are not available. But baby formula? How could that be? How could the richest country in the world fall  on its face when it comes to feeding infants? If it could happen to baby formula will my medications be next? Or will it be milk, eggs, and cheese?

In addition to the supply-chain issues, the baby formula crisis was worsened by a recall by Abbott Nutrition, the nation’s leading manufacturer. We are supposed to be in a free-market economy which means that there is plenty of competition, only for some reason in the case of baby formula, it wasn’t. In other times, competition steps in and the free market takes over.

Orthodox families also faced shortages, particularly those looking for Cholov Yisroel and not necessarily the soy-based formulas. Most infant formulas on the market have kosher certification, according to Rabbi Moshe Elefant, COO of the Orthodox Union kashrus division. “There isn’t even a question for the producers that they need kosher certification, “ said Rabbi Mordechai Stareshefsky of the OU.

The Biden Administration reacted in much the same way they did in the surging fuel prices crisis when they released fuel from the national reserves. This time President Biden invoked the Defense Production Act which assured that formula manufacturers were to be first in line for any ingredients they need. Biden also directed the Defense Department to use its contracts with commercial airlines to speed the delivery of formula from overseas.

So how does it happen that a big manufacturing plant like the one Abbott has in Michigan has to shut down because of contamination? In addition to taking steps to ensure that the plant is pristine clean of any contamination, why did not the company have a contingency plan in case there was some kind of problem at the Michigan plant? After all that one plant supplied one-fifth of all the infant formula in the country.

It does not help that the CEO of Abbott apologized exactly when the first overseas shipment of formula approved by President Biden arrived in the U.S. “We’re sorry to every family we’ve let down since our voluntary recall exacerbated our nation’s baby formula shortage,” wrote CEO Robert Ford in an op-ed published in the Washington Post. Really? Where was the apology for not running a clean plant?

Instead of reacting to a short supply crisis, the government should be initiative-taking in heading off shortages of “essential” products by assuring that there is competition and that no company owns more than a certain percentage of the supply. After all, isn’t that what our antitrust laws are supposed to protect, to make sure that no one company has a monopoly? There is a problem in that the government is part of the supply process of infant formula. Half of all the formula sold in the U.S. gets to families through the federal Special Supplemental Nutrition Program for Women, Infants and Children (WIC). So, the government is a big part of the problem in that they took no steps to head off the critical shortage in the first place.

It all began with some supply chain issues but really became a problem when Abbott, the nation’s largest manufacturer of baby formula, voluntarily closed a large plant in Michigan after four children fell sick with bacterial infections. “We believe our voluntary recall was the right thing to do. We will not take risks when it comes to the health of children,” CEO Ford wrote. Now we hear that the formula shortage is already having repercussions. Children in Tennessee, Georgia, Wisconsin and other states have reportedly been hospitalized as a result of the formula shortage. Some of the products affected by the shortage are hypoallergenic formulas designed for children with milk allergies or other difficulties digesting food normally. Abbott will establish a $5 million fund to help those families with medical and living expenses until the supply crisis is relieved, Ford announced.

As of now, the end may be in sight for the baby formula shortage but the bigger picture of supply chain issues and avoiding shortages of critical supplies remains unaddressed.  Abbott’s plant in Michigan will reopen the first week of June. The company reached an agreement with the Food and Drug Administration to reopen the shuttered plant and it should take another six to eight weeks for shelves to fill up again.

The baby formula crisis will serve as a good lesson for how to deal with critical products, particularly pharmaceuticals and essential food like baby formula. The first step would be to exercise greater oversight of plants so that there is no contamination. Next up would be to relax regulations that restrict competition, particularly imports from overseas, and encourage competition even in the buying of products such as the government being the biggest buyer of baby formula for its WIC program.

The supply chain for nutrition for our babies “is far more fragile than I think anyone would ever realize,” said Ron Belldegrun, founder and CEO of new formula maker ByHeart. It took over $40 million and five years to open the company’s infant formula factory, which began production a few weeks ago, he said, and millions more were spent on research and development, clinical studies and a host of other Food and Drug Administration requirements. “This has been a wake-up call to the systemic problems we have,” said Kristin Rowe-Finkbeiner, CEO of MomsRising, an advocacy group for mothers and families.

Beyond Abbott and Reckitt, other companies have had limited success breaking into the baby-formula market. Nestlé had a nearly 10% market share in the U.S. last year, according to Euromonitor, while store brands, such as Target’s or Walmart’s brand, made up about 5% and Danone SA, the owner of Happy Baby products, had a roughly 1% share.

It is hoped that the White House and Congress learned an important lesson of their oversight role. They also must deal with supply chain issues along with inflation particularly fuel prices which are fueling prices for all of us. But most importantly, we cannot play Russia roulette with our infants.