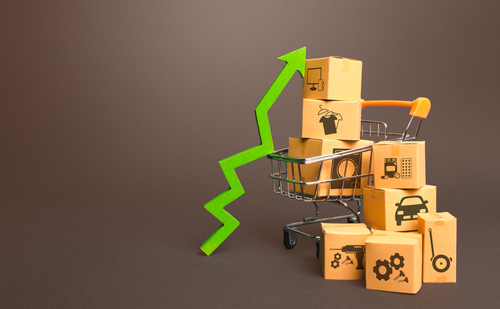 For months, economists and financial experts were writing the obituary for retail as we know it. The pandemic, they said, has permanently changed the retail scene. People have simply gotten used to the idea of shopping from their living rooms. To prove their point, they listed a long list of brand name stores that were closing, malls that were going under, and constantly declining retail sales. To offset these declining facts were the impressive numbers for e-commerce, led by such giants as Amazon. The bottom line was that the classic retailer is a thing of the past.

But surprise, surprise, retail suddenly seems to be rebounding with a gusto we have not seen since before the pandemic. Retail sales rose 3.8 percent in January, the US Commerce Department reported, a sharp increase from the decline of the just concluded holiday season. Specifically, there were many bright spots that only a month or two earlier appeared to be heading south. Spending at car dealers rose 5.7% percent over the previous month, e-commerce sales went up 14.5%, electronics and appliances up 4.6%, and sales at clothing and general merchandise stores, such as department stores, were higher as well.

The surprising bounce in retail came at a time when the Omicron wave was believed to set back  sales and inflation was taking a big bite out of retail. In recent days there were even vibes that the Russian invasion of the Ukraine was having a major impact, immediately raising oil prices as both Russia and the Ukraine are key oil suppliers. At a time when economists were expecting fuel prices to level off and even decline, the motorist is seeing $4.00 a gallon at the pump. It remains to be seen whether the instability will have a trickle-down effect on consumer prices in general.

The new optimism about the future of retail stems from the reports of increased sales of such bellwether retailers as Macy’s and Home Depot. It wasn’t so long ago that the parent company of Macy’s was shutting down stores. Subsequently Macy’s stock went up sharply as did Home Depot which  also reported fourth quarter results that beat analyst estimates and boosted its dividend by 15 percent. Target reported that its net retail sales for the four weeks ended January 28, 2012, were $4,608 million, an increase of 5.1 percent from $4,383 million for the four weeks ended January 29, 2011

Continuing on the good news front, the National Association of Realtors released a report unexpectedly showing a sharp increase in existing home sales in the month of January. The  home sales spiked 6.7 percent to an annual rate of 6.50 million in January after tumbling 3.8 percent to a revised rate of 6.09 million in December. In short, another down trend was showing a reversal.

It wasn’t too long ago that Macy’s was heading in the opposite direction and became a symbol of the changed retail environment. But the year-end analysis shows that overall sales last year were $24.5 billion, compared with $24.6 billion in 2019 with a net profit of $1.4 billion. Macy’s is the owner of the Bloomingdale’s and Bluemercury chains. These numbers suggest that the worst may be over, which is another reason for the sudden optimism for retail sales.

There is an overall sense that the pandemic is winding down, which is largely responsible for the return of customers to brick and mortar stores. People are simply venturing out and looking for the traditional retail experience. A store like Macy’s is also dependent on a robust travel industry which seems to be coming back slowly. The airports are increasingly beginning to look like 2019. Although Manhattan is still a long way from returning to pre-pandemic levels and offices are still largely abandoned, retailers say that they are seeing traffic from those buildings albeit nowhere near pre-pandemic levels. The retailers are anxiously waiting for the return of the office building shoppers. However, they note that domestic tourism is slowly coming back in some form. They are also applauding Mayor Eric Adams new focus on safety which they say will help them immensely. The rising crime rate in the Big Apple has certainly not been kind to retail, especially since so many people have shunned the crime-ridden public transportation.

Another measure that gives an indication just how much people are spending are the major credit card companies. Mastercard and Visa indicated that consumer spending has strengthened despite the ongoing COVID-19 pandemic and rising inflation.  Mastercard SpendingPulse report showed that January U.S. retail sales increased 7.2% over last year, and online sales rose by 10.4% from January 2021. Among the categories that saw considerable growth were apparel, electronics, and appliances, says the report. Mastercard’s report attributed the increase in consumer spending to income growth, increased consumer savings and the slow return of experiential purchases, such as restaurants.

Impressively, the Mastercard’s report included travel services, such as airlines and lodging, in its U.S. retail sales figure. The emergence of the omicron variant disrupted the travel industry’s recovery, which spelled trouble for card issuers hoping for a boost in travel spending. The latest figures are further proof that travel is returning, albeit that the Russian-Ukrainian crisis has set back fuel prices and may discourage some domestic automobile travel.

“Coming on the heels of the holidays, January typically marks a month of returns and exchanges. However, the strong growth across sectors reflects the optimism and eagerness for the year ahead,” Mastercard senior adviser Steve Sadove said in a statement. “With nearly all sectors up, we see consumers returning to their shopping habits with a continued emphasis on digital.”

What the rebound in sales shows is that retailers need to enhance the shopping experience to attract customers anxious to return to conventional “shopping.” The big stores seem to have gotten the message by bringing back special promotions and VIP shopping days. Because of the special needs of our community the decline in retail was not as steep as it was in the general market. Food stores, of course, thrived in the last two years as did other specialty stores like clothing, Judaica, and even silver and jewelry stores.