The Good and Bad News For the Construction Industry 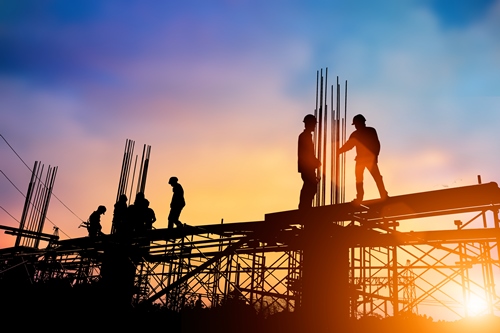 IF you took a drive in New York City, or for
that matter in any major U.S. city these days, you
would be hard-pressed to miss the construction
cranes everywhere. In fact, you would likely be
diverted or at least slowed down driving through
a construction zone. Yes, the level of construc-
tion is a key economic indicator. One measure of
economic stability or growth is “housing starts,”
meaning how many new houses are being built.

Single-family housing stats in August were at a
rate of 1,021,000, 4.1% above the July figure of
981,000. On the surface, these numbers look good
and certainly show no reason for concern.
The positive numbers are significant since the
expectation in the industry was that the COVID-
19 pandemic would exact a significant toll from
the construction industry. However, the USG Cor-
poration + U.S. Chamber of Commerce Commercial
Construction Index revealed a drop in con-
tractors’ confidence and outlook for their industry
during the COVID-19 pandemic, despite the fact
that it also projected that construction is
well positioned for recovery and positive change.

Like many industries, construction was greatly
affected by the early stages of COVID. But, says the
Chamber, “We’re starting to see a rebound of the
data, and the economy’s getting slightly better.”
U.S. Chamber Senior Economist Curtis Dubay
said, “We’re not anywhere near where we were
before the pandemic hit, and the Commercial
Construction Index reflects that.”

Local contractors I spoke to had some horror
stories during the early stages of COVID. They
included delayed projects, workers getting the dis-
ease, inability to get timely deliveries and more.
Eighty-seven percent of contractors in a recent sur-
vey predicted correctly that delays would continue
into the summer, and 73% expected delays to remain
in the fall. Apparently, say the contractors, delays
have of late become a way of life for the industry, but
they were optimistic that the delays would level off.
The optimism by the contractors is based on the fact
that 60% of them report having at least six months
of backlog projects. Thirty-two percent plan to hire
more workers in the next six months, while only 15%
expect to employ fewer workers.

Visit any construction site these days and you are
likely to see many changes, including greater use of
technology and increased safety. Construction site
perimeters are full of notices on COVID-19 protocols:
increased sanitation on job sites, additional
washing stations, limiting the number of employees
in each area, not sharing tools and equipment, and
frequent cleaning of high-touch surfaces despite the
requirement of wearing gloves.

So it is no surprise that people building new homes
these days are likely to encounter delays. Many proj-
ects have even stopped, usually with the intention to
resume work at a later date. People who are working
outside and are not physically close to each other may
be in a better position to comply with the new health
and safety precautions than people working in an
enclosed environment, say industry officials.

Contractually, events such as the COVID-19 pan-
demic generally do involve contractual provisions con-
cerning the consequences of unforeseen events. These
provisions commonly fall into two broad categories.
Contractual notification provisions for the making of
claims, and for keeping records of the impact of events.
Why should the average reader care about the
impact of the COVID-19 outbreak on the construction
industry? First, as I pointed out, it has broad economic
implications.

negotiating an arrangement with a construction company,
you had better know the lay of the land.One construction
site went surprisingly quiet one morning as over 50
workers tested positive. The contract the company signed
included a clause with hefty penalties for any delay which
the contractor sought to pass along to the customer.

On another site, a shortage of truckers delayed the
delivery of vital materials, impacting the timetable
of the entire project.The construction delays have also
had an impact on public projects including where the
opening of new or repaired roads are weeks and even months behind.
While contractors will tell you that they expect less
work these days, they will also say that they still
expect to have issues with skilled worker shortages, a
problem they had well before the pandemic.

The next issue that faces the industry is whether
the financing will be there. The banks were clearly
being more cautious, and private investors were pull-
ing back because of the uncertainty over the econo-
my and just how long this pandemic will linger. The
concern over financing and the economy seems to
be having an impact on projects worldwide. In many
European countries, large infrastructure projects
have ground to a halt. With the tourism industry all
but dead, planned new hotels are on hold. Talk to proj-
ect managers and they will tell you that the inability to
plan is their biggest nightmare.

Here was an industry
that relied heavily on precise planning, with the clear
objective of expediting projects for the sake of taking
on many new endeavors or “moving along,” as one con-
tractor told me. The process of planning also took a hit
from the many back-office workers who were doing
their jobs remotely and were simply not producing at
the level they had been when they were in the office.
One construction project I visited seemed to beoperating
in slow motion. A foreman was monitoring social distancing
in an industry where workers typically worked literally
toe to toe. Workers had to sign a log and answer a quick
questionnaire in English and Spanish whether they had any symptoms and wheth-
er they had been exposed through family and friends.

Finally, they had their temperature and oxygen lev-
els taken before being allowed onto the site. Said the
foreman, “Don’t think that this process doesn’t come
at the expense of efficiency on the job.”
Some industry officials describe their daily routine
as filled with uncertainty. There are so many pieces
that are necessary for construction to work proper-
ly that officials must hold their breath constantly. It
begins with taking attendance to ensure that you have
the necessary work crew and continues with plotting
the necessary deliveries of materials and the timely
appearance of subcontractors.

The U.S. construction industry is expected to con-
tract by 6.5% in 2020, and 2.0% in 2021. With eco-
nomic activity expected to contract by as much as 8%
this year, and the surge of new COVID-19 cases in the
southern and western parts of the U.S. showing no
signs of abating, the construction industry is antici-
pated to be severely hit this year. So much for the
cup being half-empty. On the positive side, predictions
are that the industry will recover between 2022-2024.
The government’s plans to increase investment in
infrastructure construction — especially in critical
sub-sectors such as transportation (roads, ports and
bridges), water and sewerage, and telecommunica-
tions — should support the sector in the coming years.
The Federal Reserve is expected to keep interest rates
at the zero lower bound for a prolonged period of time,
and continue to support the recovery through large-
scale asset purchases and emergency lending pro-
grams. Hope springs eternal!