Has the Covid-19 US Economy Beaten the Odds 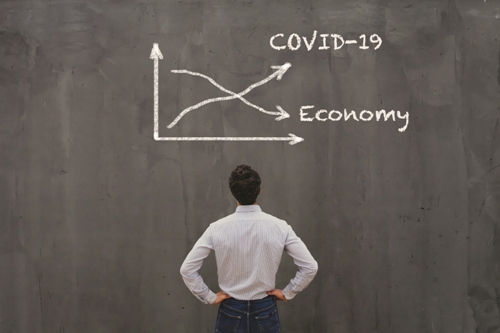 With Election Day looming, all eyes are on the US economy. Afterall, political strategists agree that most people go to the polls to “vote their pocket books.” It was in February that nearly six in 10 Americans, or 59%, said that they are better off financially than a year ago, according to a Gallup poll. As many as 75% of Americans said that the economy is in good shape, the highest in almost 20 years.Perhaps it was the bullish stock market and low unemploymentrate that made those polled feel that way. There were more women and minorities employed than was the case in more than a few decades.

But when the Covid-19 pandemic struck, even the most optimistic economic forecasters could see only gloom and doom. Health officials were predicting that the disease would linger for a long period of time. The picture quickly turned bleak as unemployment soared, commerce shut down, and the death toll seemed unchecked. The pandemic had claimed more than 195,000 lives in the US (Johns Hopkins University). It had claimed more than three times the American lives that were lost in the Vietnam War.

There is no question that the continuing Covid crisis has been devastating to the economy but perhaps not as bad as was originally thought and certainly far from what some of the economic forecasters had predicted. In examining some of the key economic indicators, it is easy to see that while Covid did stymie economic growth, it was far from a death knell to the robust American economy.

Back in April, the unemployment rate rose to a record high of 14.7%, which is 10.3%higher than just a few weeks earlier. This was the highest rate and the largest over-the-month increase in the history of the data (available back to January 1948). Unemployment rates were higher in April 2020 than a year earlier in all 389 metropolitan areas. A total of 52 areas had jobless rates of less than 10% and 12 areas had rates of at least 25%. This was largely due to the many businesses that were closing, employees who resigned to take care of children who were home from school, and the onset of a sluggish economy.

But the layoffs subsided and in September the rate had dropped to 7.9%, down from 8.4% in August 2020, according to the U.S. Department of Labor. By comparison, a year earlier, in September 2019, the unemployment rate fell to 3.5%, a 50-year low, as payrolls rose by 136,000. The jobless rate in September dropped 0.2 percentage points to 3.5%, the lowest since December 1969. There was a spike in hiring in may industries such as the essential services, health care, shipping and more.

Back in February, the stock market seemed unstoppable. Records were being set at every turn. In 2019, the S&P (Standard & Poor rating of the top Fortune-500 companies) was up nearly 32%. For President Donald Trump, who never stopped boasting about low unemployment numbers and a record-setting stock market, it seemed like a re-election gift. But in September, it was down 3.92%, bringing its year to date gain to only 4.09%. The Dow Jones Industrial Average lost 2.28% for the month and was down 2.65% year to date. Again, the forecasts were for a lot worse and in the ensuing weeks the market seemed to be improving. On some days, it seemed that Covid had never hit.

Another economic key that I looked act was the effect of the lockdowns. The lockdown was particularly devastating to America’s retailerswho were already reeling well before the pandemic, but Covid worsened the toll on traditional retailers.Forecasters say business will never go back to “normal,” as many shops have had an impossible time coming back from this year’s long lockdowns.A record 9,500 stores went out of business in 2019, which seemed massive even before Covid could be blamed. But the experts now predict that as many as 25,000 could shut down permanently in 2020, mostly in malls (Coresight Research).So far in 2020, more than 8,000 retail locations have gone dark for good, Coresight says.

Even as this update is being written, many of the Orthodox communities have been deemed Red Zones forcing retail stores that are deemed non-essential to be shuttered once again. The hard-hit restaurants that seemed on the verge of reopening are once again relegated to takeoutonly in many Red Zones, all but assuring that many more will be forced to close, especially without any government assistance, which some took advantage of in the early days of the pandemic.

While the prophets of doom may have struck out on their dire predictions, there were many positive signs that point toan underlying strength of the US economy. For example, exports from the US increased by $3.6 billion or 2.2% to $171.9 billion in August 2020, the highest level since March, as global demand continued to recover from the coronavirus pandemic shock. Goods exports were up by $3.5 billion to $119.1 billion on the back of sales of industrial supplies and materials, such as nonmonetary gold; and foods, feeds, and beverages, in particular soybeans.

The National Bureau of Economic Research (NBER) determined that a peak in monthly economic activity occurred in the U.S. economy in February 2020, marking the end of the longest recorded U.S. expansion, which began in June 2009. Had Covid not set in that economic activity would have reached new heights. While it continued to grow, it was nearly not as much as could have been.

After reviewing all the data, I felt optimistic that the slide was contained and if only the Covid pandemic could be contained either through the safety measures in place or the introduction of a new vaccine, the economy would rebound and quickly. For now, I can only say that we may have dodged the bullet and are fortunate that the prophets of doom did not rule the day!